The Problem with Delve 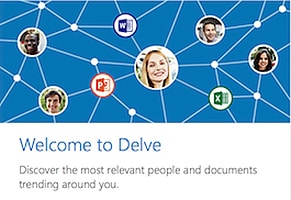 In our last blog article, we talked about Predictive Analytics and its use by Microsoft in Office Graph and Office Delve. We raised issues with this kind of predictive approach and discussed the limitations. In this article, we will focus on Delve particularly and explore why it is having difficulty living up to its promise.

Delve is a feature of Office 365. According to Microsoft, you can “use Delve to manage your Office 365 profile, and to discover and organize the information that’s likely to be most interesting to you right now – across Office 365.”

Delve “surfaces” content from OneDrive for Business, SharePoint, Exchange, Yammer, and more. It relies on Office Graph, which “continuously collects and analyses signals that you and your colleagues send when you work in Office 365.” The end result is that, in Office 365, you can go to Delve and see a display of what it determined are “relevant” documents.

Promising as this may be, the same problems with Predictive Analytics apply to Delve.

In any kind of analytics, there has to be enough data to provide relevant results. Delve only uses Office 365 content, not on-premises or other sources, such as Salesforce, ERP’s, and other applications outside Office 365. That leaves out a lot of data that is important to the business. Using only Office 365 components limits what data is available to Delve – the documents, spreadsheets, and other content that is “surfaced” is from Office 365 only.

Delve’s Relevance — “Interesting, but what does that have to do with me?”

Another problem is that Delve “organizes documents according to what’s likely to be most relevant to you right now”. How can it know what is “likely” to be most relevant? Apparently, just from seeing the interactions – the Office Graph “signals” mentioned above: people working on the same document or in the same group, for example.

But Delve does not consider the following crucial factors, and is therefore quite limited:

Subtle Social Cues: “Social cues” are simply what we all do every day – a quick word with someone, a short conversation, a text, a chat, a hint here or there, even body language or a certain look. As humans, we can place these cues in context very quickly, and that helps guide us as to what should be worked on and where we should put our attention.

When people work together, these many subtle interactions give guidance as to what is relevant and important. This interpersonal interaction does not adapt well to algorithms. These subtle cues cannot be digested by Office Graph nor used by Delve. It is just not there in the “signals” that the software picks up; this missing context can easily throw what Delve displays into irrelevance.

Individuals Are Individuals: Everyone has his or her own style of working. Even if you classify people into Type A, Type B, etc., it is rare that anyone fits the mold precisely. With Delve, there is a certain assumption that people all work the same way. Delve’s relevance engine does not take into account the unique style everyone has. For example, someone may just write up a document all at once, then send it off. Another person may labor over every sentence and keep opening and saving, and then also seek others’ advice and review – that is, many more “signals” than in the previous example.

Another person may be strictly business and only send minimal emails; someone else may like forwarding attachments and commenting on everything going on; another person could send around all sorts of irrelevant emails and documents.

Assessing what is relevant based on what a person works on, views, or shares could work in some cases, but in most would not. Inevitably, many of the documents Delve “surfaces” would be irrelevant to the work at hand. This means Delve can produce information overload and end up being a distraction, much along the lines of what many of us experience when we view a website and are then drawn off by curious, but irrelevant, articles and videos.

In reality, does a person really need to know what everyone else is doing in order to get his or her own work done? A lot of what others are doing (view, searching, writing, reviewing) is unrelated to someone else’s current work — and can even be not related to the business at all!

Time Lag Factor: We mentioned this in the Predictive Analytics article – that the data analysis is always “behind the 8-ball.” As we all know, what was relevant yesterday (or even earlier today, perhaps even one hour ago!) is not necessarily relevant right now.

A work environment changes rapidly and often unpredictably. Yesterday, the sharing and viewing on such-and-such project was important, but today we are on to something else. Basing relevance on past “signals” is like determining what to wear today based on yesterday’s weather.

Admittedly, longer term projects move at a slower pace, and yesterday’s, or last week’s, work would likely still be relevant. But overall, the fact that Office Graph can only process “signals” after they occur, puts Delve’s relevance at a big disadvantage.

Currently, electronic documents are stored in what are essentially virtual file cabinets, arranged according to a structure people determine. As the locations where documents can be stored multiply, it becomes harder and harder to find the information needed right now. It is understandable why attempts are being made to solve this problem. Delve and other predictive systems try to do this, with the goal of bringing more efficiency to the work environment and making people’s jobs easier.

However, as this article and the previous one point out, there are inherent issues with Predictive Analytics and applying it to the workplace. Perhaps we are at an early stage of this and future developments will counter some of these objections and make a system like Delve a powerful force in the workplace.

Some of the hurdles may be too high, though, such as algorithms being able to understand human behavior at its most subtle levels. We humans took many, many years to develop our “work culture”, which keeps evolving and adapting -probably most of us don’t even fully understand it. Expecting a computer program to understand it is quite a bit beyond where we are at now.

Do you use Delve? Have you found it relevant and useful? Send your experiences with Delve to delve-survey@crowcanyon.com and we will include them in a future blog.
___
Crow Canyon Software delivers the power of a connected, digital workplace to your organization, helping you be more successful and competitive. We provide the tools that allow you to gain the maximum benefit from SharePoint and Office 365, Microsoft’s premier collaboration platforms.

Want to learn about how our business productivity applications for SharePoint and Office 365 can power up your organization? Give us a call at 1-925-478-3110 or contact us by e-mail at sales@crowcanyon.com. We look forward to hearing from you!