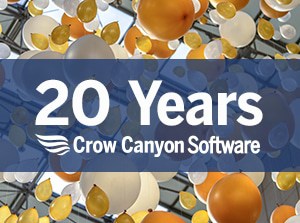 1999 –when the Internet was still young, 5 years before Facebook was founded, and a “cloud” was still something that floated in the sky. The Millennium and the Year 2K Scare were a year away. Microsoft had just come out with Exchange Server 5.5 and Outlook 97 – at the time, big advancements (over, say, MS Mail and Eudora) for corporate email platforms.

Outlook had VB scripting to build forms and workflows and Exchange had the Public Folders for the forms to sit in. We built the Outlook Help Desk, posted it on the nascent Internet (we used Yahoo and AltaVista directories, being that Google was still in its infancy). Soon, orders started coming in from all over. We incorporated the company in January of 1999 and Crow Canyon was off and running!

We kept developing newer and more sophisticated versions of Outlook Help Desk as the releases of Outlook (2002, 2003, 2007, etc.) and Exchange (2000, 2003, 2007) kept coming out. We expanded the Help Desk to be a “Service Request” system, able to handle any type of request from any department, along with tracking assets and equipment. This system was known as “CCS Service Request”, “CCS” obviously being short for Crow Canyon Software. Its popularity as a collaboration tool continued to soar.

However, at the same time, Microsoft was introducing SharePoint Portal Server, SharePoint Team Services, and Windows SharePoint Services. We kept our eyes on those, as Microsoft was clearly shifting the collaboration platform from Exchange to SharePoint.

The issue was that an email server such as Microsoft Exchange needs to be optimized for very rapid, transactional I/O. It is really just shuffling items from one place to another, much like how the US Postal Service sorts regular mail, you could say.

With Exchange’s Public Folders being downplayed and SharePoint rising up as Microsoft’s tool of choice for collaboration, we started developing applications for SharePoint. Beginning with version 2007 – what was known as MOSS (Microsoft Office SharePoint Server), we applied our years of experience with application development to SharePoint. The basic functionality of the applications stayed consistent, but we brought it to the new SharePoint development environment.

Many of our customers followed us along as they adopted SharePoint. We continued developing on SharePoint 2010, 2013, and 2016, shifting along with Microsoft as it went from sandboxed solutions to the App model to the SPFx framework. We developed all our own add-ins and used those web parts and enhancements to power our applications on the SharePoint platform.

In 2011, Microsoft came out with Office 365. We jumped on board with that, expanding our team and developing apps and tools for that platform. We ported all our applications to Office 365.

And the business kept growing, with our applications, whether in SharePoint on-premise or in SharePoint Online/Office 365, continuing to providing efficient, cost-effective solutions to organizations around the world.

In the last year, we commercialized our unique development platform, calling it “NITRO Studio™”, to give people a powerful tool to build their own applications on SharePoint and Office 365. The popularity of NITRO Studio, with its forms, workflows, reports, and portals, is growing rapidly as people see it as an alternative to high-priced tools like Nintex and K2 and as a way to easily replace InfoPath forms and other legacy programs.

As we enter 2019 and celebrate the 20th anniversary of our founding, we look to a bright future with many possibilities and exciting opportunities. We have introduced AI Services into our applications and the NITRO Studio, including chatbots, NLP, and enhanced KB searches. We are fully integrated with the Modern UI that is taking over Office 365 as well as an important component of SharePoint 2019. We are fully immersed in the mobile and responsive design elements that make our applications run so well on smartphones.

Though it is hard to imagine right now what technology will be like in 2039, we fully intend to keep adapting and growing along with the changes. We will continue to develop our applications, with the same goal we started with, that of providing our customers with the tools they need to improve their operations, make their work easier, increase profitability, — and drive their success.

We look forward to working with you, our customers, for another 20 years!