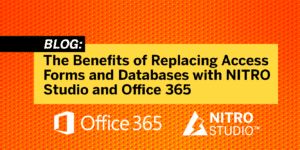 Government Agency Moves into the Modern Era — and Access Developer Can Now Retire in Peace!

Recently, a customer of ours asked if NITRO Studio forms & workflows could replace a Microsoft Access application. Our answer was: it most certainly can, and will provide new and expanded features that Access does not.

The customer, a government agency, was using an Access database application that was developed in the late 1990s to manage contracts. It included Access forms for user input and management of records. The database had served its purpose for some time, but its usefulness was fraying at the edges for a number of reasons, mostly that it was using outdated technology:

With a deadline looming due to the developer’s retirement, the agency was looking for a replacement. Being that they were now on Office 365, using that platform was an obvious place to start the search. Once they reviewed our NITRO Studio and saw how it enhanced Office 365, they could see the many advantages to moving off Access and replacing it with a NITRO Studio-based SharePoint application running in their Office 365 environment.

Let’s look at the benefits of using SharePoint and Office 365, along with our NITRO Studio, to replace the Access database:

By using Office 365 with our NITRO Studio, this government agency was able to move off its outdated Access database application – and could now enjoy the benefits of a cloud-based, mobile-friendly, fully integrated application that will be supported and enhanced well into the foreseeable future. It also gave them a foundation for building other applications in Office 365 that can automate and streamline additional business processes at the agency.

Most of all, the agency was able to breathe a deep sigh of relief, knowing they had an application that put them on the latest technology  and brought them new features they were sorely missing. And, the person retiring – well, he can enjoy his retirement in peace, and not have to field calls looking for assistance with the old Access database!